Once upon a time, there was harmony, joy, laughter, complicity, confidence, and prosperity. Music could be heard anywhere. Was it a way to communicate or a language? The modes of communication were never clearly identified, although…

Even disputes were settled with games. The parties in disagreement faced each other in the center of a circle formed by others for a musical joust which led to improbable triumphs. The truth was in the rhythm. Every opportunity to enter into the magic of music was seized, to the point of retrieving any object left behind, gone unnoticed, fallen. The zest drove people to collect objects to produce musical sculptures, that could be played alone or in groups. Recycling was at the core of the heart.

One morning, the wind picked up. It was loaded with strange dust, which darkened the sky and suddenly changed day into night. As always in times of crisis, they gathered in a circle and began to play music, hoping that mother earth would bring back the light. Still nothing. The cold mingled with fear, opinions, and doubts clashed, the hubbub intensified. Someone raised his voice to urge silence. Since the music had no effect, they had to stop playing! The musical jousts had turned into sterile verbal jousts. One after the other, they curled up, split off from each other, withdrew… For the first time, the circle was empty. The heaviness and the darkness had taken over.

Not far from there, there remained a man and a woman who met regularly in a cave, where they liked to play. Being used to the shadow, they knew that darkness does not exist without light… The place inspired them, helped them to create, to improvise, allowed them to be in touch with a mystery that was beyond them. The climate had changed to the point where everyone’s frozen heart seemed to stop beating. It was out of the question that the heart, the first percussion, would stop! Music had to be played immediately, to improvise at the moment!

And the sounds kept on rising.
Aussitôt que possible.
As Soon As Possible. 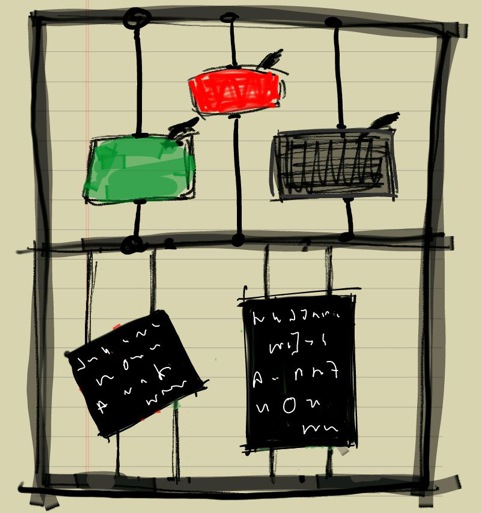